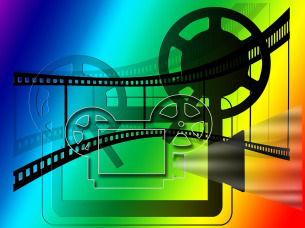 Pauleen Cass has set a fun challenge and invited us to share some of our childhood memories. All you need to do is copy her list of questions and let the memories flow.

So, without further ado, it’s time to grab the popcorn, put up your feet and settle in for some movie-going memories…

What’s the earliest movie you can remember:
My mother trusted Walt Disney and took me to see Dumbo when I was just a little girl – about 4 or 5 years old. Mum thought it would be a great children’s movie for me to see…until the scene where they tear little baby Dumbo away from his mother. I went into hysterics, could not be consoled and the sad episode ended with a hasty escape from the theatre. Mum never trusted Walt Disney again, and to this day she still curses his name!

Where did you go to the movies (place or type of venue):
There were three main places growing up:
1. The drive-in theatre with my parents which was a major adventure – often in my pyjamas. I’d be sent off to buy snacks at the kiosk and sometimes would play on the swings with the other kids. Then, when the movie was on, I sat in the back seat huddled under a blanket to keep warm. Remember the speakers hanging over the edge of the wind-up car window?
2. The “Flea Pit”, as it was affectionately known. I have no idea what its real name was. It was this massive, cavernous, warehouse type building down on the Wynnum foreshore – across the road from the wading pool and the big jetty. The seats were canvas and, when you were little, you couldn’t see over the tops of the seats in front to see the screen so they would give you cushions to sit on. There was the obligatory theatre cat who slept in the seats and pigeons and doves entered through the windows way at the top of the theatre and flew around the ceiling. There was always a double feature on Saturday.
3. The movie theatres in the city. As a teenager, my friends and I regularly caught the train up to the city on the weekend to see movies and wander around the stores. I remember one particular day, my best friend and I went on a movie rampage. I think we saw about 5 movies in various theatres in one day! The only one I can remember now is Never Cry Wolf which I remember really enjoying. By the end of the day, my friend and I came reeling out of the last movie theatre, dazed and confused, blinking at the light and vainly trying to remember the first movie we had seen that day. It was fun!

Did you buy movie programs:
Nope. Didn’t have them by the time I started going to movies. Or don’t remember there being any.

Did you take in food and drink (and what did you like):
As a kid, it was mainly a soft drink of some sort, maybe a choc top and definitely maltesers. They lasted longer cause you had to suck the chocolate off first.

Movies of your teenage years:
E.T. The Extraterrestrial
The Indiana Jones movies
Ghostbusters
Back To The Future
Beverley Hills Cop
Romancing The Stone
Die Hard
The Princess Bride
Dirty Dancing
Terminator movies
Star Wars movies
Poltergeist
…Basically all the usual fare teenagers saw in the 80s.
I do remember one memorable occasion where, as a group, we couldn’t decide what to go see and one of us suggested Cyrano de Bergerac with Gerard Depardieu. Peer pressure won out and off we duly trotted to see the movie. Everyone happy until the first actor spoke and then someone piped up, “I didn’t know it was going to have SUBTITLES!” What a tragedy! I thought it was a great movie and it is still my favourite version of the story.

Do you remember how old you were when you went unsupervised:
I was about 13 years old. Mind you, this was at a time when most children lived an unsupervised and untrammelled existence, free from the interference of parents. From a young age, I rode my bicycle all over the neighbourhood (I had about a 5km range in any direction) with my dog by my side. My mother farewelled me at breakfast and didn’t see me again until sunset for dinner. I had 20c in my pocket for lunch which was the price for a minimum serving of chips down the local fish and chippy. And it was a HUGE serving wrapped in newspaper which I shared with my dog.

Mischief you got up to in the movies:
We didn’t really. Too well-behaved for our own good, if you ask me.

Did you watch movies at home:
I remember when my parent’s bought our first VHS player shortly after they first came out. It had a “remote control” attached to the machine via a long cord. The first movie they bought was Where Eagles Dare. I can’t watch it anymore because we watched it too many times on that VHS player!

Do you prefer to watch movies at home or at the cinema:
As a teenager, I liked going with my friends to the cinema. Now I prefer to watch them at home. The screens are just too tiny at the cinemas these day. Not like the massive monstrosities they were when I was a kid. And I get grumpy at all the little irritating things like rustling chip packets, people talking, kicking seats, mobile phones, etc.

Does your family have a special movie memory:
My mother and I have a love of disaster movies. We love watching them together and critiquing the action and laughing at the abysmal back stories. The best ones are where there is lots of destruction earlier on in the movie. I dislike the ones where they keep it all for the last 5 minutes of the film.

Movies you fell in love to/with:
As a teenager, I definitely fell in love with Harrison Ford in the Star Wars and Indiana Jones movies.

Favourite romantic movie theme music:
I’ve never paid that much attention to the music. If I notice it, I don’t think it is doing its job properly. Music should set mood and tone but not intrude enough to notice. Unless it is a musical, of course.

Favourite musical movie:
Can’t choose between Kiss Me Kate and Seven Brides For Seven Brothers. Both have great songs but Seven Brides has the best dance sequences.

Which movies made you want to dance/sing:
Natch…Kiss Me Kate and Seven Brides For Seven Brothers.

Do you watch re-runs or DVDs of old movies:
All. The. Time.

Do your children/family enjoy the same movies:
Mostly, though I have a low taste in good quality action flicks (or even bad quality if the fight sequences are really good).

Did you read the book before or after the movie:
Varied. Sometimes I read a book and then they make the movie. Sometimes there is a book of the movie written later.

Which did you enjoy more, the book or the movie:
Depends. For example, I think the book of The Princess Bride is hilarious and I love reading it more than seeing the movie.

What’s the silliest movie you’ve seen (silly funny or silly annoying):
Silly Funny: Monty Python and The Holy Grail  (“On second thought, let’s not go to Camelot. It is a silly place.“)
Silly and Very Annoying: Sharknado (I couldn’t make it to the end).

Pet hate in movies:
Two main pet hates:
1. Music so loud you can’t hear what people are saying.
2. Horrible shaky cameras which are meant to make things look “realistic” and instead just give me a headache and make me want to throw up.

If you could only play 5 movies for the rest of your life, what would they be:
Arghh! 5 is not enough.

Extras: Heathers, The Maltese Falcon, Groundhog Day, How to Steal a Million, Office Space, Kiss Me Kate, The Americanization of Emily, The Philadelphia Story, Hopscotch, Life of Brian, Cat On A Hot Tin Roof (Paul Newman and Elizabeth Taylor), To Catch A Thief…Arghh!

From the above, you’d think I mostly only watch classic movies. This is definitely not the case, but I find that it is the older movies that stick with me the most. It’s called “Classic Hollywood” for a reason.

I get a lot of joy from watching movies. My favourite five make me think a lot (yes, even Seven Brides) and often provoke conversation and different insights every time I watch them.

If you want to join in the fun, check out Pauleen Cass’ Merry Month of May Movie Meme blog post and write up your own memories for your family to enjoy.

13 Responses to Merry Month of May Meme: Movie Memories

Please leave a comment. I would love to hear from you. Cancel reply

This site uses Akismet to reduce spam. Learn how your comment data is processed.

Croning My Way Through Life

This is all about my travels to the past... my reflections and musings about yesteryear, as I find the stories of a people passed away and learn how to tell them.

Before, During, and Laughter

A Tribute to my ancestors by Kerryn Taylor

Meet those who have gone before..

or should that be geneaglossary?

Family history across the seas

My family history in Australia and overseas and related migration research